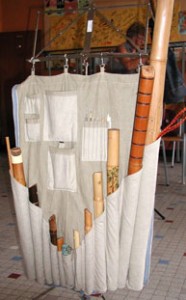 One way to keep pipes close at hand while playing

Where Did Pipes Originate?

A British music teacher, Margaret James, started making these in the 1920’s, based on an old goatherd’s pipe. During the last century their popularity gradually spread to different countries – Austria, Belgium, Germany, Greece, Italy, Japan, the Netherlands, Switzerland, the USA – where groups were formed to make and play pipes.

Now there are big international courses involving all those countries every few years, where the camaraderie is remarkable.

What are Bamboo Pipes?
Bamboo pipes are simple musical instruments with cork used for the embouchure, resembling recorders but with a sweeter sound. They are not sold but must be made by the players themselves, under the guidance of a master teacher. They come in sopranino, soprano, alto , tenor, bass, quart bass and great bass sizes, alternating between G and D as the fundamental tone. Their range is an octave and a third to an octave and a sixth, depending on the type of instrument. They are carefully tuned so they can be played with a variety of other instruments.  Their sweet sound has long been heralded by composers from many nations.

Why Make One?
There is something unique about creating one’s own sound, as part of a high-quality musical instrument, and subsequently playing with others who have done the same. One learns more about acoustics and the production of sound than from buying a ready-made instrument. In addition, it brings you into contact with a special international movement of pipe makers and players.

Charlotte Elliott Poletti, founder and President of the American Pipers’ Guild, received her B.A. from Smith College and an M.S. in Music Education from the University of Illinois. She has studied extensively in Europe and is only one of two Americans to have attained Masters status in the making and playing of pipes. She is also an examiner for future Master teachers. Over the last thirty-five years, she has taught more than 1,000 students aged 7 to 70 to make and play pipes, including in the Adirondacks where she hopes to continue her work. She has been a frequent guest teacher for the Austrian, British, Dutch, French, and Swiss Pipers’ Guilds. She presently directs several performing groups in New England which give periodic concerts in the area. She has taught music in several different schools for many years and has been a children’s choir director and singer at the Asylum Hill Congregational Church in Hartford, Connecticut. She also composes music, has published three music books for pipes, and loves researching music history.